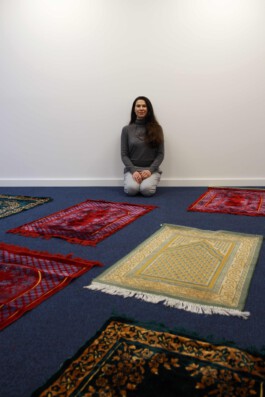 Religious tendencies
A city walk exploring spirituality in our community

Places of worship once sat at the heart of people’s spiritual lives. Whether faith continues to be well-served by the official religions remains an open question. Meanwhile, the spiritual space once dominated by churches has left voids that other practices are beginning to fill. We see it in the rise of certain political ideologies, individual prophethood, or radicalisation tendencies, but also in the advent and growing popularity of new communities and idiosyncratic faith formats. Even very secular sectors have moved to fulfil this role, becoming rife with spiritual potential – whether yoga classes or silent retreats, extreme sports or museum visits: life itself appears more and more like a secular question of faith. So how do major and minor religions position themselves in the current environment?

We will explore this question on a tour of the Essen city centre, home to numerous houses of worship, religious places, congregations, and communities. The Old Synagogue, one of Germany’s largest, best preserved testimonies to Jewish culture, goes beyond the teaching of Jewish traditions to actively engage in improving relations and mutual understanding between Jews and Muslims. Its annual Arche Noah Fest (Noah’s Ark Festival), held over several days in September, attracts people from a wide range of ethnicities and religions; meanwhile, the nearby VielRespektZentrum not only offers prayer rooms for different religious groups under one roof, it also tries to bring them into conversation with one another. We join leaders, pastors, activists, and other engaged individuals on a tour of religious sites and cultural institutes in the city; along the way, they share their insights, future prospects and what they have to offer.

Advance booking required.
Participants will be informed about the meeting point after booking.