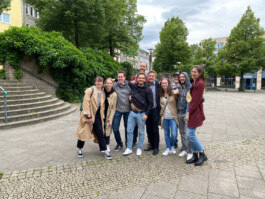 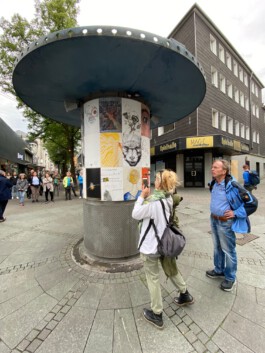 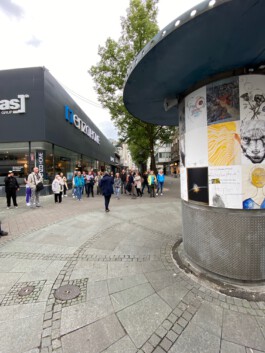 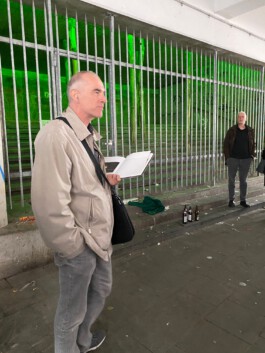 Folkwang and the City
Introductory tour around Berliner Platz

What better place to launch Folkwang and the City than the area around Berliner Platz in central Essen, an interesting urban jumble of public structures that, though ostensibly very different – i.e. a shopping centre, a university campus, Weststadthalle, a music school, Unperfekthaus, a multiplex cinema, a media company – are connected by more than initially meets the eye, or certainly more than just a multi-lane, roaring roundabout. Furniture stores usually found on the greener outskirts of a city blend in between traffic axes, insert themselves into a scenario that appears straight out of a car-centric city of the 1960s – though it actually dates from 2010. Nestled between shopping monoliths and the German Federal Agency for Labour and Social Affairs are the remnants of a red-light district in the style of a single-family housing estate. Directly adjacent is Grüne Mitte Essen (Green Centre Essen), a newer district built to showcase investors’ ideas about intra-urban living between the city centre and university grounds. Behind Limbecker Platz – a plaza now covered by a shopping mall of the same name – is City Nord, a classically-grown area that is still trying to settle on an identity between inner-city shopping area, migrant housing zone, creative quarter, and nightlife haven.

Introducing the project are museum director Peter Gorschlüter and project manager Markus Ambach; together they guide visitors on a city tour of the visible and hidden worlds of this urban space, an area characterised by various urban planning concepts, pragmatic use, and striking discontinuities. Between parking decks and vegetable shops, red light milieu and furniture shop, goth scene and thimble collection, Lebanese bakery and shisha bar, the focus is on parallel and shopping worlds, new and old urbanities, diverse ways of life, assorted religious views. It is precisely here that the urban space of Essen reveals itself in all its complexity – we’re searching it for a future that is apparently still in flux.

Participants will be informed about the meeting point after booking.